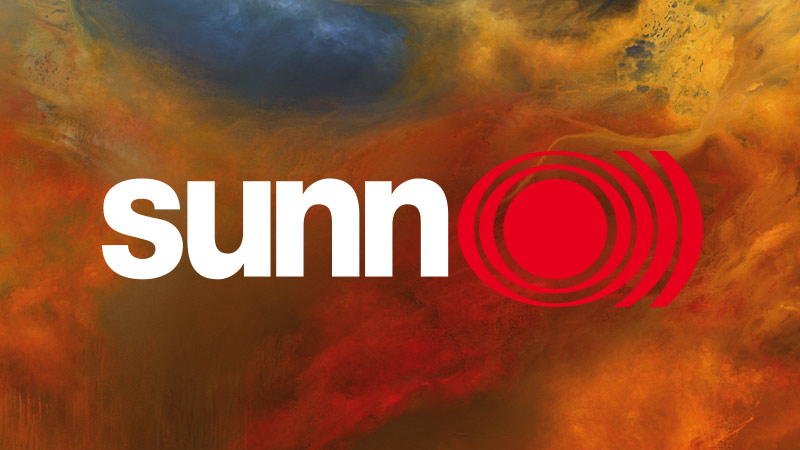 At the very beginning of 2018 Sunn O))) cofounders Stephen O’Malley & Greg Anderson set their intention and set out a path toward a new Sunn O))) album production. They were both determined to create not only new music but a new method of working with the band in the studio, without forgoing the long history of production and studio accomplishments they’d won over the first 20 years of the band’s lifetime (and the members’ own musical experiences outside of the band’s). One long term goal was completely clear : to record O))) with Steve Albini in his Electrical Audio Studios A room. Steve took the call, said “Sure, this will be fun. I have no idea what is going to happen”.

Greg and Stephen gathered twice in the spring for writing, conceptualising and riff woodshedding in the very building where the band was formed : downtown rehearsal in Los Angeles. Sonic cosmoses, flashes of abstract color (synthetic and objective) and themes emerged from the mastered depths of saturation and circuits between the two players and the mountains of gear. Strong themes of brightness, color, energy and visionary cues stepping toward subconscious areas of practice, as well as exploration into other areas of consciousness through sound/time and sound energy. In early summer a preproduction session with full backline, as a trio with TOS on Moog, was done at the Foo Fighter’s 606 studios, Northridge, CA.

In July 2018 Sunn O))) spent just over two weeks in Chicago with Steve at the helm. The results are astounding, the breadth of color and sound vast, impeccably recorded and represented and completely accurate. The spectrum cracked the firmament open in clarity. An all analogue technique was used, recording and mixing on tape, providing a creative gateway for O))) to evolve their recording methods into stronger, confident, performance based and a more logical executive process. The album was mastered and lacquers cut in October by O))) ally Matt Colton at Alchemy in London. The LP version is an AAA album, a completely analogue production and signal path. This means it’s analogue entirely from the input of the band’s amplifiers and the air coming off the speakers in front of the microphones to needle touching the pressed vinyl on your turntable.

Continuing one of the main currents of the SUNN concept, depth of exploration with collaboration, brought Hildur Gudnadottir. Hildur is a sometime live collaborator of O))) over the years and also a renowned film music composer, was a member of the bands Mum, Pan sonic and Angel and also was long time collaborator to the comes Johann Johannson (RIP). She lent her incredible attitude, as well as her voice, breath and electric cello, and the mythical haldorophone to the proceedings, culminating in the epic composition/concerto “Novæ”. The cosmos clearly expand.

Tim Midyett, a close friend of Greg and Stephen since the Seattle days of the early 90s, (and member of Silkworm, Bottomless Pit and Mint Mile) joined as a foundational role tying the earth to the sound with wicked performances on aluminium neck bass and baritone guitars. Instruments he helped pioneer using back in the 90s (alongside Steve and Shellac of course). Dark matter is reality.

A mutually decision regarding “new”, aesthetics, processes, directions and ideas, for all resulted in Attila not participating on the record, although he clearly continues to exist at the centre of the O))) family. Attila reincarnated his mythical black metal band TORMENTOR in the meantime. Sunn O))) highly recommend everyone to get into TORMENTOR, they have been fans since the early 90s.

There is a second more meditative LP titled “Pyroclasts” which was also recorded by Steve, in parallel, and which will be revealed in the autumn 2019 (more later). All music performed by Stephen, Greg, Tos, Tim Midyett, Hildur Gudnadottir, and Anthony Pateras.

Sunn O))) are touring March (EU/France), April (USA), September (USA), October (UK & Europe). They are working toward some special events in London and other cities. There may be some other special festivals and performances here and there (we hope).

The record is titled “Life Metal”. There is a second LP titled “Pyroclasts”. All music performed by Greg, Tos, Tim Midyett, Hildur Gudnadottir, Anthony Pateras and I. Attila is not on the record and probably not going to be on the lives in 2019 (maybe some exceptions). The record was recorded by Steve Albini at Electrical Audio, Chicago, IL July 2018, written by Greg and I and produced & arranged by Sunn O))). Preproduction was done at 606 studios, Northridge, CA June 2018. Paintings by Samantha Keeley Smith, Photos by Ronald Dick. Photo session produced by Sylvia Farago and assisted by Karen Langley.

We are touring March (above), April (USA), September (USA), late sep/oct (Europe), maybe another run in Europe and working toward some special events in London and other cities. There may be some festivals here and there (I hope).

Like a painting, we will be erased.
Like a ﬂower, we will dry up here on earth.
Like plumed vestments of the precious bird.
That precious bird with the agile neck,
We will come to an end.

He goes his way singing, offering ﬂowers.
And his words rain down
Like jade and quetzal plumes.
Is this what pleases the Giver of Life?
Is that the only truth on earth?

Recorded & mixed on magnetic tape.
LP edition is mastered in a pure analogue chain from tape to cut (AAA), digital editions are mastered from tape to file (AAD).